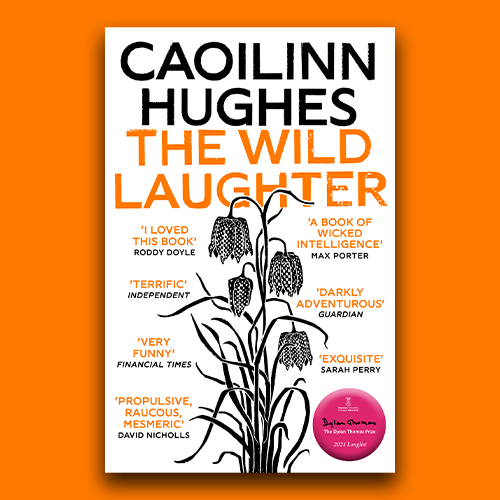 Caoilinn Hughes has won the £10,000 RSL Encore Award for her “grand feat of comic ingenuity”, The Wild Laughter.

The prize is given annually to the best second novel of the year, and was judged this time around by Sian Cain, Nikita Lalwani and Paul Muldoon.

Accepting her prize, Hughes said: “The trail between the first and second novel is rough terrain. We all have bruises or IOUs to point at! But the readership a writer finds through her second novel is the more enduring readership. The Encore Award is a crucial recognition of its stakes. This award helped to bring Irish writer heroes like Dermot Healy, Anne Enright and Colm Tóibín to the fore, not to mention Sally Rooney and Lisa McInerney more recently. Other UK writers I so admire like Ali Smith and A L Kennedy were also championed early on by this award. To be following this lineage is strange and glorious.”

The Wild Laughter was also longlisted for the 2021 Dylan Thomas Prize and shortlisted for the Dalkey Literary Awards. It was also chosen as a Book of the Year 2020 by the Irish Sunday Times, Irish Independent, Rick O’Shea, and Sebastian Barry.

The judges said The Wild Laughter was “a grand feat of comic ingenuity, mischievous and insightful, and full of resonance for the way we live now”, adding: “The voice of Caoilinn’s doomed narrator, Doharty ‘Hart’ Black, is so original and vibrant, with a very particular poetic vernacular. This is a story of modern Ireland, set in the crash post Celtic Tiger, but it also feels timeless in many ways, with Biblical myth simmering under the surface. The Wild Laughter is a real page-turner, in spite of its literary heart, and a joy to read. We all look forward to reading more from Caoilinn Hughes in the years to come.”