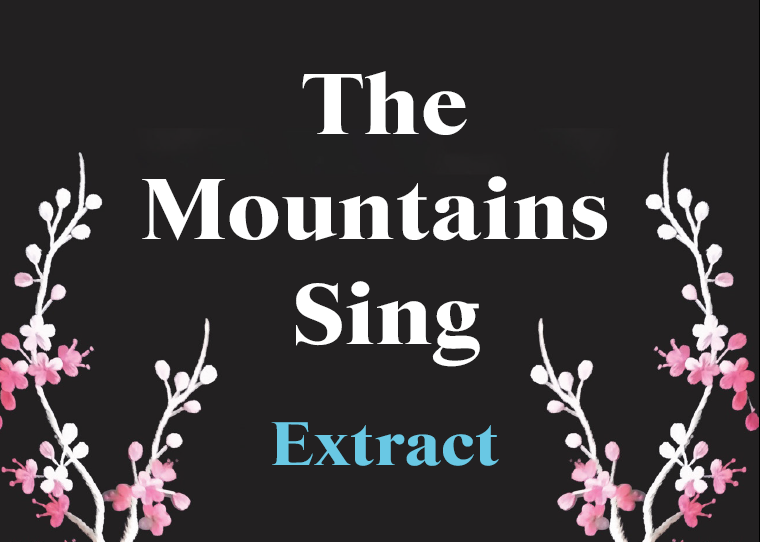 The Mountains Sing is a vivid, compelling and deeply moving book that brings to life the true human cost of a devastating war, and the improbable power of hope to sustain us when all seems lost. Read on for an extract from one of the early chapters:

I wondered if my eldest uncle had a family. I studied the shack, but the only thing that told me about his past was the altar—a wooden shelf clinging to the rusty wall. On it stood a statue of a man nailed to a cross. My uncle had become a Christian?

I followed Grandma through the back door, which opened into an area shaded by a thatched roof and surrounded by the tin sheets of the neighbors’ homes. A clay stove sat on the earthen floor, next to a pile of firewood. A large, brown jar stood in the corner, half filled with water.

“There’re so many things I want to ask him.” Grandma cried into her palms. “I don’t understand why he hadn’t sent us any news. He could’ve tried to let me know that he was alive. All these years . . .”

“He must have his reasons, Grandma. He’ll be able to tell us soon.”

Scooping water out of the jar, we washed our faces. I soaked my washcloth, using it to cool Grandma’s back. It pained me to see her bones and the scars inflicted by Wicked Ghost.

Grandma filled a bucket with water. Carrying it inside, I saw my mother sitting next to Uncle Minh, going through a stack of papers. As Grandma entered, she quickly put the papers into her knapsack.

“Ready for a sponge bath?” Grandma asked. Uncle Minh smiled. Suddenly his body jumped with bouts of coughing. Glancing at my mother, I read the worry in her eyes.

The coughing eased. The front door opened, but instead of Auntie Hạnh, a boy came in, carrying a steaming bowl. I thanked him and fanned the phở.

Grandma washed Uncle Minh. My mother unpacked parcels of herbs. She weighed different ingredients, pouring them into the clay pot she’d brought along.

Uncle Đạt came back with a tray full of ice, which he placed next to Uncle Minh. He took the fan from me, flicking it, sending coolness around the room.

At the back of the shack, I kindled a fire. My mother poured water into the clay pot.

She pulled me to her, her lips against my ear. “Don’t tell Grandma yet. Your uncle Minh is dying. Those papers he showed me . . . cancer. It’s spread to his lungs and liver. He was hospitalized for months, but the doctors sent him home, said they could no longer help.”

“But you, Mama, your medicine can do magic.”

“I’m afraid it’s too late. The cancer is too advanced. The results of his tests . . .” She bit her lip. “I’ll try, but I think I can only help to relieve the pain of his last days.”

My chest hurt for Grandma. How could she cope with such awful news?

I turned to the fire. Human lives were short and fragile. Time and illnesses consumed us, like flames burning away these pieces of wood. But it didn’t matter how long or short we lived. It mattered more how much light we were able to shed on those we loved and how many people we touched with our compassion.

The Mountains Sing is published in July 2020, and is available for pre-order now. Click here for more information, plus keep an eye out for our cover reveal soon!