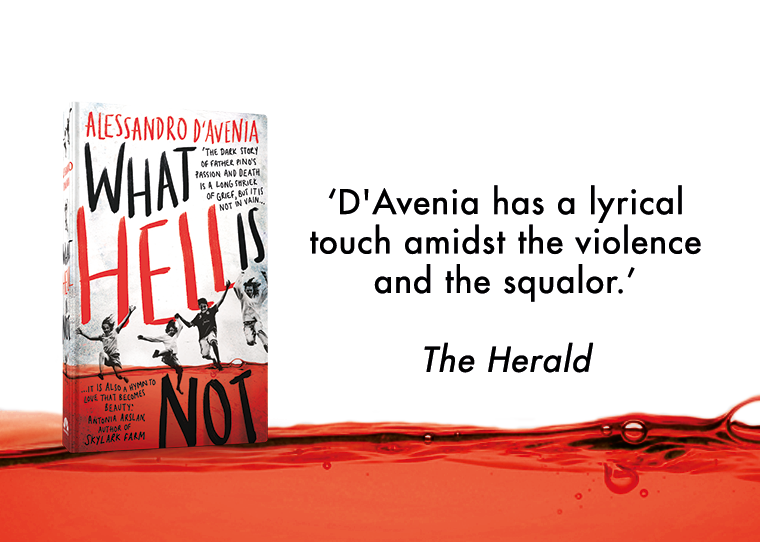 During his recent trip to London, Alessandro D’Avenia read the following extract from his bestselling novel, What Hell Is Not.

This haunting, unforgettable book tells the story of Don Pino’s resistance to the mafia bosses who terrorise the local community in Palermo. For those of you who couldn’t join us for our sold-out event at the British Library, the passage below perfectly captures the sensitive, poetic tone of What Hell Is Not.

‘There are five things that a person regrets when they are about to die. And they are never the things they consider important during their life. We won’t regret the trips that never went further than the window display at the travel agency. We won’t regret the new car, a better salary, or a woman or man that we dreamed of. No, at the moment of death, everything finally becomes real. And there are five things that we will regret, the only real things in a life.

The first is not having followed our inclinations in life instead of being prisoners to others’ expectations. The mask of skin that made us lovable, or made us believe we were lovable, will fall by the wayside. And it was the mask created by fashion, by our false anticipation, to heal the resentment of wounds we never faced. It’s the mask worn by those who are content merely by being lovable. But not loved.

The second regret is having worked too hard, having allowed ourselves to be overwrought by competition, by results, by running after something that never arrived because it existed only in our minds. We regret having neglected people and relationships. We wish we could apologize to everyone. But there’s no time left for that.

Then we will regret not having spent time with those whom we love. We didn’t bother to worry about those we always had around, for the very reason that they were always around. And yet the pain reminded us every so often that nothing lasts forever. But we underestimated this as if we were immortal. We continued to put it off, giving the right of way to what was urgent and not to what was important. How did we manage to endure so much loneliness in life? We tolerated this because it was ingested in small doses, as you do with a poison so as to become immune. And we suffocated the pain with tiny, sweet little surrogates. We couldn’t even manage to make a call and ask how things were going.

What Hell is Not is available from all good bookshops and online. Find out more about the book here.