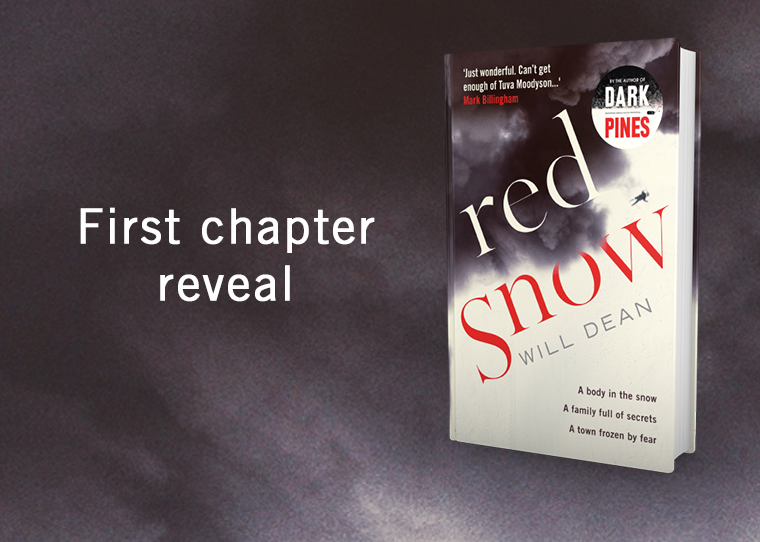 There’s a Volvo down in the ditch and I’d say it’s been there a while.
I touch the brakes and my truck comes to a stop nice and easy, studded tyres biting into ice and bringing me to a silent standstill.
It’s all silent up here. White and utterly, utterly silent.
The display on my dash reads minus nineteen Celsius. I pull on my hat and move the earflaps so they don’t mess with my hearing aids and then I turn up the heat and leave the engine idling and open my door and step down.
The Volvo looks like an ice cube, all straight lines and sparkling crystals, no signs of life, not a colour or a feature to look at. It’s leaning down hard to the right so I’m roughly level with the driver’s side window. I knock. My gloved knuckle sounds dull on the frosted glass so I rub my hand over the window but it’s blasted solid with ice.
I step back, cold air burning my dried-out cheeks. Need more creams, better creams, prescription winter creams. My mobile has no reception here so I look around and then head back to my pick-up and grab my scraper, one from a collection of three, you can never be too careful, from my Hilux door well.
As I scrape the Volvo window the noise hits my aids like the sound of scaffolding poles being chewed by a log chipper. I start to get through, jagged ice shards spraying this way and that. And then I see his face.
I scrape harder. Faster,
‘Can you hear me?’ I yell. ‘Are you okay?’

But he is not okay.
I can see the frost on his moustache and the solid ice flows running down from each nostril. He is dead still.
I keep scraping and pull the door handle but it’s either locked or frozen solid or both. My breath looks nervous in front of my face, clouds of vapour between me and him, between my cheap mascara and his crystallised eye lashes. I’ve seen enough death these past six months, more than enough. I knock on the glass again and strain at the door handle. And then his eyes snap open.
I pull back, my thick rubber soles losing purchase on the shiny white beneath.
He doesn’t move. He just looks.
‘Are you okay?’ I ask.
He stares at me. His body is perfectly still, his head unmoving, but his grey-blue eyes are on me, searching, asking questions. And then he sniffs and shakes his head and nods a kind of passive-aggressive ‘thanks but I got this’ dismissal which is frankly ridiculous.
‘My name’s Tuva Moodyson. Let me drive you into Gavrik. Let me call someone for you.’
The frozen snot in his moustache creaks and splinters and he mouths ‘I’m fine’ and I can read his lips pretty well, over twenty years of practice.
I pull on his door handle, my neck getting hot, and then it starts to give so I pull harder and the ice cracks and the door swings up a little. It’s heavy at this angle.
‘You trying to snap my cables?’ he says.
‘Sorry?’
‘It’s about minus twenty out here I’d say and you just yanked my door open like it’s a treasure chest. Best way to break a door handle cable.’
‘You want to warm up in my truck?’ I say. ‘I can call breakdown?’
He looks out toward my truck like he’s deciding if it’s a suitable vehicle to save his life and I look at him and at the layers of clothes he’s entombed himself in: a jacket that must contain five or six others judging by its bulk, and blankets over his knees and thick ski gloves and I can see three hats, all different colours.

He coughs and spits and then says, ‘I’ll come over just to warm up, just for a minute.’
Well, thanks for doing me that favour mister Värmland charm champion.
I help him out and he’s smaller than me, half a head smaller, and he’s about fifty-five. There’s a pair of nail scissors on the passenger seat next to a carrier bag full of canisters, and there’s a bag of dry dog food in the footwell. He locks his Volvo like there are gangs of Swedes out here just waiting to steal his broken down piece of shit car, and then he trudges over to my pick-up truck.
‘Japanese?’ he says, opening the passenger side.
I nod and climb in.
‘Ten minutes and I’ll be out your hair,’ he says.
‘What’s your name?’
He coughs. ‘Andersson.’
‘Well, Mr Andersson, I’m Tuva Moodyson, nice to meet you.’
We look out of the windscreen for a while, side by side, no talking, just staring at the white of Garvik Kommun. Looks like one of those lucky blanks you get in a game of scrabble.
‘You that one that writes stories in the newspaper?’ he says.
‘I am.’
‘Best be heading back to my car now.’
‘If you go out there again you’re gonna end up dead. Let me drive you into town, your car will be fine.’
He looks at me like I’m nine years old.
‘I’ve driven more tough winters than you’ve had hot lunches.’
What the hell does that even mean?
‘And I can tell you,’ he says, rubbing his nose on his coat sleeve.
‘This ain’t nothing. Minus twenty, maybe twenty-two, it ain’t nothing. Anyhows, I texted my middle boy three hours ago, told him my location, and when he’s done up at the pulp mill he’ll come pick me up. You think I ain’t spent time in ditches in winter?’

‘Fine. Go,’ I say, pausing for him to think. ‘But I’ll call the police and then Constable Thord’ll have to come by and pick you up. How about we save him the bother.’
Mr Andersson sighs and chews his lower lip. The ice on his face is thawing, and now he just looks flushed and gaunt and a little tired.
‘You gonna be the one driving?’ he says.
I sigh-laugh.
He sniffs and wipes the thawed snot from his moustache whiskers.
‘Guess I don’t got much choice.’
I start the engine and turn on both heated seats. As we pass his frozen Volvo he looks mournfully out the window like he’s leaving the love of his life on some movie railway platform.
‘Why don’t you buy Swedish?’ he asks.
‘You don’t like my Hilux?’
‘Ain’t Swedish.’
‘But it goes.’
We drive on and then he starts squirming in his seat like he’s dropped something.
‘My seat hot?’ he says.
‘You want me to switch it down a notch?’
‘Want you to switch the damn thing off cos I feel like I peed my pants over here.’ He looks disgusted. ‘Goddam Japanese think of everything.’
Okay, so I’ve got a racist bore for a passenger but it’s only twenty minutes into Gavrik town. It’s never the cute funny smart people who need picking up, now is it?
‘Where do you want dropping off, Mr Andersson? Where do you live?’
‘Just drop me by the factory.’
‘You work there?’
‘Could say that. Senior Janitor. Thirty-three years next June.’

I pull a lever and spray my windscreen and the smell of chemical antifreeze wafts back through the heating vents.
‘How many janitors they got up there?’ I ask.
‘Just got me.’
‘You get free liquorice?’
‘I ain’t got none so don’t go asking. I’m the janitor and that’s it.’
I drive up to an intersection where the road cuts a cross-country ski trail marked with plastic yellow sticks and they look like toothpicks driven into a perfect wedding cake. The air is still and the sky’s a hanging world of snow and it is heavy, just waiting to dump.
‘You did the Medusa story, eh?’
I nod.
He shakes his head.
‘You just about ruined this place, you know that? Good few people be quite pleased to see you run out of town, I’m just saying what I heard.’
I get this bullshit from time to time. As the sole full-time reporter here in Gavrik, I get blamed for bad news even though I’m just the one writing it.
‘I’d say it was a job well done,’ I say.
‘Well, you would, you done it.’‘You’d rather elk hunters were still getting shot out in the woods?’

He goes quiet for a while and I switch the heat from leg/face to windscreen.
‘All I know is we lost some hard-won reputation,’ he says. ‘And thank God we still got the factory and the Mill to keep some stability. That’s all I’m saying and now I done said it.’
As I get closer to town, the streets get a little clearer, more snowploughing here, more yard shovelling, and the municipal lighting’s coming on. 3pm and the streetlights are coming on. Welcome to February.

‘Suppose you were just doing your job like anyone but we’re a small town and we’re cut off from everywhere else so we’ve learned to stick together. I got eight grandkiddies to worry about. You’d know if you were from these parts.’
I drive on.
The twin chimneys of the factory, the largest employer in town, loom ahead of me. It’s the biggest building around here save for the ICA Maxi supermarket. Two brick verticals back-dropped by a white sheet.
‘Say, you hear me pretty good for a deaf person, don’t mind me saying.’
‘I can hear you just fine.’
‘You using them hearing aid contraptions?’
I feel his eyes on my head, his gaze boring into me.
‘I am.’
‘I’ll be needing them myself pretty soon, sixty-one this coming spring.’
I drive past the ice hockey rink and on between the supermarket and McDonalds, the two gateposts of Gavrik, and up along Storgatan, the main street in town. I head past the haberdashery and the gun shop and my office with its lame-ass Christmas decorations still in the window, and on toward the cop shop, and then I pull up next to the Grimberg liquorice factory established 1839 or so it says on the gates.
‘This okay?’ I ask.
He gets out without saying a word and I look around and there are five or six people scattered about all looking up to the sky. This doesn’t happen, especially in February. A hunched figure in a brown coat slips on the ice as he walks away. I try to look up through the windscreen but it’s frosted at the top so I open my door and climb out onto the gritted salted pavement. I can hear mutterings and I can sense others joining us from Eriksgatan.
They’re looking up at the right chimney, the one I’ve never seen smoke coming out of. There’s a man, or I think it’s a man, a figure in a suit climbing the ladder that’s bolted to the side of the chimney and he’s climbing higher and higher past the masts and phone antennas bolted to the bricks. He’s in a hurry. No hat or gloves. I look up and the sky is blinding white, dazzling, and the pale clouds are moving fast overhead, the wind picking up, and as I stare up it’s like an optical illusion, like the chimneys are toppling over onto me.

And then the man jumps.