Ten things you didn’t know about the heart 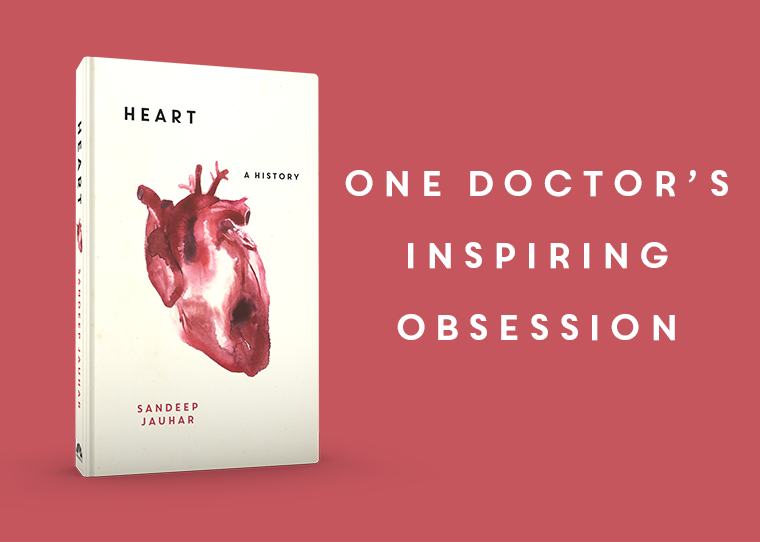 The heart is one of the most complex organs we all have. Take a look at ten things you definitely didn’t know about it, courtesy of Heart: A History by Sandeep Jauhar.

It’s at the centre of who we are

The heart’s vital importance to our self-understanding is no accident. If the heart is the last major organ to stop working, it is also the first to develop – starting to beat approximately three weeks into foetal life, even before there is blood to pump. From birth until death, it beats nearly three billion times.

The rhythm of life…

More than anything, the heart wants to beat; this purpose is built into its very structure. Heart cells grown in a petri dish start to contract spontaneously, seeking out other cells (through electrical connections called gap junctions) to synchronize in their rhythmic dance. In this sense, cardiac cells – and the organ they create – are social entities. The heart can continue to beat for days, even weeks, after an animal has died.

The Ebers Papyrus, one of the oldest medical documents in the world, identified the heart as the centre of blood supply

Over the centuries, disparate cultures have viewed the heart as the source of a life-giving force that was to be culled or harvested. In ancient Egypt, the heart was the only organ that was left in the body during mummification because it was believed to play a central role in the rebirth of an individual after death. They believed the heart was where the soul resided, of course, but a classic document, the Ebers Papyrus, also described the heart as the centre of the blood supply, with vessels directed towards the major organs. ‘The actions of the arms, the movement of the legs, the motion of every other member is done according to the orders of the heart that has conceived them.’

The ♥ shape, called a cardioid, is common in nature. It appears in the leaves, flowers, and seeds of many plants, including silphium, which was used for birth control in the early Middle Ages and may be the reason why the heart became associated with sex and romantic love (though the heart’s resemblance to the vulva probably also has something to do with it). Whatever the reason, hearts began to appear in paintings of lovers in the thirteenth century.

You can die of a broken heart

There is a heart disorder first recognized about two decades ago called takotsubo cardiomyopathy, or the broken-heart syndrome, in which the heart acutely weakens in response to extreme stress or grief, such as after a romantic breakup or the death of a spouse. Patients (almost always women, for unclear reasons) develop symptoms that mimic those of a heart attack. They may develop chest pain and shortness of breath, even heart failure. On an echocardiogram, the heart muscle appears stunned, frequently ballooning into the shape of a takotsubo, a Japanese octopus-trapping pot with a wide bottom and a narrow neck.

How sonar helped us see the heart

Inge Edler, a cardiologist, and Carl Hellmuth Hertz, a physicist, invented echocardiography at the University of Lund in Sweden in the early 1950s. They went to shipyards to study sonar, making the conceptual leap that if you can use ultrasound to see a ship five hundred metres away, maybe you can use it to see the heart, too, if only you could change the depth of penetration. They made a prototype probe and put it on Edler’s chest.

Until a revolutionary summer day in 1893, surgery had scarcely ever been attempted on a live human heart. Though it is difficult to fathom today, the heart was essentially off-limits to doctors until almost the beginning of the twentieth century. All major human organs, including the brain, had been operated on, but the heart stood apart, encased in historical and cultural prohibitions much thicker than its membranous pericardium. Dr Daniel Hale Williams broke the mould when he drained a traumatic pericardial effusion in twenty-four-year-old James Cornish, who’d been stabbed with a knife in the chest in a saloon scuffle. Cornish was bleeding profusely when he was dropped off at the hospital by a horse-drawn ambulance. With no diagnostic equipment other than a stethoscope – X-rays would not be discovered for another two years – Williams examined him.

The pacemaker was discovered by accident

In the early 1950s, Wilson Greatbatch was working on a livestock farm near Ithaca, New York, testing instruments to monitor heart rate and brain waves in sheep and goats, when he learned about heart block from two surgeons doing a summer research sabbatical there. ‘When they described it, I knew I could fix it,’ Greatbatch later wrote. A few years later in Buffalo, Greatbatch was working with the newly invented transistor when he accidentally installed a resistor into a circuit he was testing, causing it to give off a signal that pulsed for 1.8 milliseconds, stopped for a second, and repeated – a rhythm that mimicked the human heartbeat. ‘I started at the thing in disbelief and then realized this was exactly what was needed to drive a heart,’ Greatbatch wrote. ‘For the next five years, most of the word’s pacemakers used [this circuit], just because I grabbed the wrong resistor.’

It was a close race, but Christiaan Barnard in Cape Town broke the transplant tape first, on December 3, 1967, thirty-four days before his rival Norman Shumway. His first patient, Louis Washkansky, a fifty-five-year-old grocer, received the heart of a young woman who had suffered brain damage after being hit by a car while crossing the road. He lived for eighteen days after the procedure, succumbing to a lung infection after his immune system was weakened by drugs to prevent organ rejection. Shumway had to content himself with doing the first adult heart transplant in the United States a month later, on January 6, 1968.

The inventor of balloon angioplasty

Andreas Gruentzig helped to popularize angioplasty – his procedure to unblock arteries using a balloon catheter – in the United States by performing approximately 2,500 from 1980 to 1985. He had so much faith in his technique that he once had a cardiology fellow perform a coronary angiogram on Gruentzig himself. Gruentzig climbed onto the cath table at 5:00pm, underwent the procedure, and then went to pick up his wife, arriving at the department’s Christmas party by 7:00. Incidentally, his coronary arteries were normal.

From Sandeep Jauhar’s Heart: A History, out now.