Q&A with Claire Hajaj, author of The Water Thief 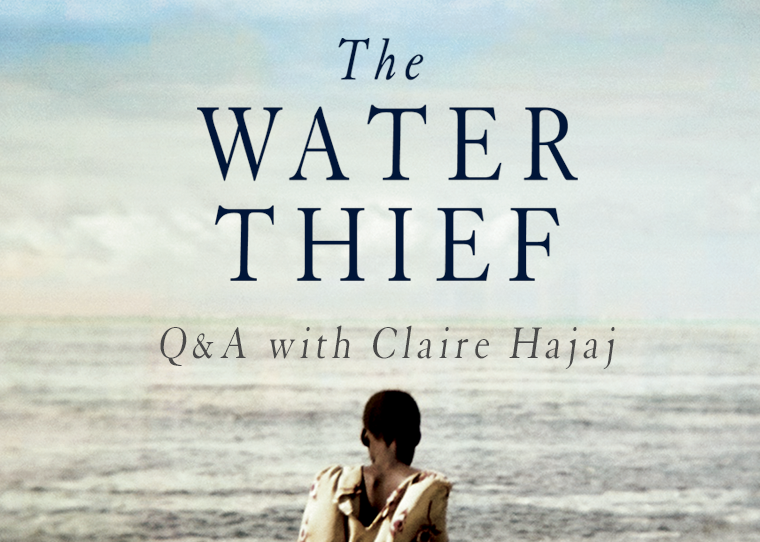 Claire Hajaj, author of The Water Thief (published in paperback on 7th March 2019), answers questions on the themes of the book and the writing process.

Your novels straddle the expectations of different cultures and religions – in THE WATER THIEF, the themes and teachings of Islam, Christianity, Judaism, and native African religions are represented. Do you feel these issues are the fundamental issues of humankind? Why are you drawn to write about them?

I grew up in a Christian country between two politically-opposed faiths – Judaism and Islam. And it may sound radical in this time of division between Islam and the West, but to me the great moral divide isn’t between any one religion and another, but between those who believe in a guiding universal force, and those who believe we’re on our own to figure it out. Whether you’re an American conservative or a Syrian refugee, you still believe that God ordains your path. That He stands for what’s right and fair. You still turn to God when life gets complicated and you need guidance, and trust in His will.  Even we modern liberals who don’t call ourselves believers – and I’m one of them – still hold to universal standards of fairness and justice. We’re religious too – only without the God! But in the worst of times and worst of places, it can seem like the world is driven by violent forces that are blind to fairness and immune to prayer. That survival is the only commandment. My novel asks – where does truth come from, in times of great trial? When all our trusted certainties are stripped away, how do we find a moral north? Or does it even exist at all?

In THE WATER THIEF, a British engineer escaping his life and past sins goes to Africa to do good and help build a hospital — though he means well and tries to improve the living conditions of the people who welcome him as a guest — he ends up endangering the lives and fortunes of the entire village, as well as his own. Where did the inspiration for this novel come from?

The spark for the novel was lit more than a decade ago, on a stifling Ramadan night in a remote West African border village at the height of the Iraq war. I was a young aid worker deployed to try to bring vaccines to a population during an outbreak. We faced such suspicion, such hostility to our presence. It was tragic to see families who really needed those vaccines stirred up to believe that we were anti-Muslim, that no one could be bombing Muslims in one country and trying to help them in another. At that late-night meeting to review the campaign, review our options, try to figure out a way around the mistrust and the people driving it – I saw all these faces I recognized, faces like mine – transformed with anger and frustration. When people were dying needlessly, unthinkable options can so easily start to seem like the only right course.  Years later, in other times and places, I saw the same moral dilemmas played out – to take out Assad, or leave Syrian families to his bombs? To welcome smuggled refugees, or turn the boats away? This story is not a big international saga. It’s a very tight drama – spanning just nine months, in one small village. But looks at how we confront our choices, and their consequences as they change over time.

At the beginning of the novel, JoJo is an impressionable child infatuated with the British visitor teaching him how to be an engineer. Throughout the story, though, we see how easy it is for him to turn to a Boko Haram-like gang for belonging — did you do research to develop his character?

JoJo is my favourite character in the story – I learned so much from writing him. He made me rethink a lot of my preconceptions about how boys and young men fall towards violence and extremism.  I drew on my experience of young Syrian refugees in Lebanon, and young Palestinians in the camps there, as well as many discussions with mothers of young boys during work trying to eradicate polio in Africa. Cultures differ, but I started to feel that young boys growing up poor are really a global culture of their own. Whether in Detroit or northern Nigeria or Shatila Camp in Lebanon, poor children are so full of life, so funny, so hopeful. But they are also somehow much more attuned to injustice than their parents. They are desperate for their lives to have purpose. And nothing frustrates them more than feeling helpless. They push back.  And some cultures help them do that in smart, socially productive ways – as with the March for our Lives protest movement. And in some cultures, anything other than total obedience is stifled and punished. So when people tell me – as many do, particularly when they talk about Palestinian youth – “Oh, their parents should just teach them not to hate,” I find it so detached from reality, such an expression of blind privilege.  JoJo’s parents try that tactic. They accept injustice because they fear it can’t be changed. They look seek solace in faith and fatalism, while dreaming of escape or applying small remedies that make no real difference.  They want their son to stick to the same, safe path. But against that kind of helplessness, and without real hope, violence can seem a pretty alluring alternative.

How long did you work on writing THE WATER THIEF?

Writing is a long process – but editing is longer! The first draft was ready in six months. But it’s like working on a stone block with a fine sculpture in your mind, and then stepping back to realize you’ve carved just the roughest outline. Drawing the story out of the stone took more than a year.

Was there anything that surprised you while writing the book?

Yes – I was surprised when it was stolen: literally, ripped from my hands along with my computer, my wallet and house keys by a man on a motorbike as I was walking home from a concert one Beirut summer night.  One minute there – gone the next: AND, I hadn’t backed it up. I remember falling to my knees in the street as I realized what had happened and what it meant. You can never replace a story, never duplicate it exactly. In some very small way, it’s like losing a very early pregnancy – something utterly unique, part of you, gone forever. I mourned for a week, until I woke up one morning to an email on my replacement computer. “Dear Lady,” it started. “I was walking through the Damascus market today and found a computer. I thought it must be stolen – because it had all your details on it. The man in the shop will sell it tomorrow. He has a buyer for $800. Please email me if you want it back.”  That was the opening salvo of a complex ransom demand, negotiated across the Lebanon/Syria border. Eventually I paid him $600 – this shadowy, charming sometime aid worker who doubled as part of a theft and ransom ring. At last my book was handed back across the border, on a bus full of refugees. I often think about them, and hope they also had a happy ending.

What do you hope readers will take away from the story?

I hope this is a story for this historical moment – a time of test and trial for so many of us. Whether it’s Brexit or immigration, March for our Lives or the Muslim Ban, Syria strikes or “shithole countries” – so many of us seem to feel like events are hurtling us towards consequences we can’t predict, demanding a response even if we’re not sure what will make things better and what will make them worse. When times call for change, how do we step up? When people we love are hurting, where do we draw the line? What messages to we give our children? Who is the ultimate judge of our actions? My protagonist, Nicholas, is someone I think we all can recognize – someone caught between desire and conscience, between the pressure to conform and the search for higher purpose, a flawed human being trying to strike the right course between two different versions of “right”. I chose to leave the setting nameless – a desert village in the middle of nowhere. It was a controversial choice with my editors. But to me, this this is not a story about Africa. There are plenty of great African authors – Nigerian, Ugandan, Kenyan, Moroccan, Algerian and others, writing their own stories with their own voices. People interested in African cultural fiction should read them. I’m not an African writer or an Arab writer or a British writer; I carry no-one’s flag. My story is a fable about choices and a clash of worldviews – how as human beings we try to find the right road without a map. I’d love it to resonate with anyone facing their own moment of trial, anyone who sees life-shaping choices ahead for themselves, their family or their community.