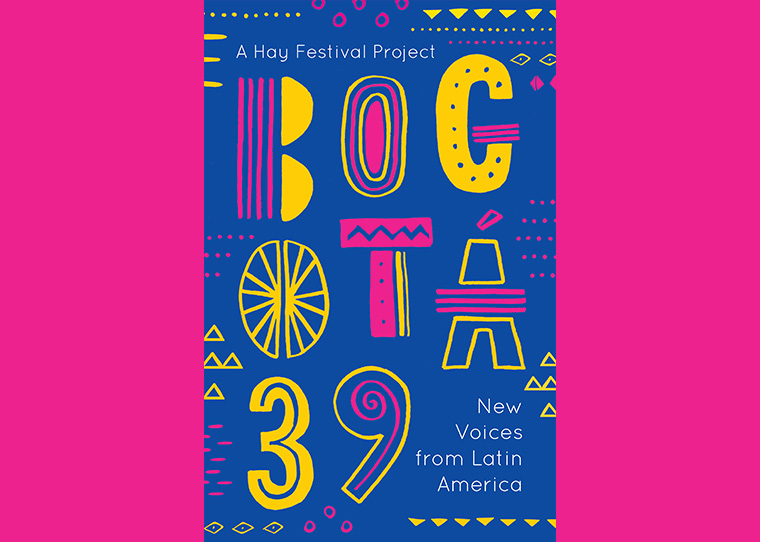 From the state of LatAm literature and the challenges and opportunities for young writers today, to the role of writers on the global stage and why the UK needs to read more literature in translation, Liliana Colanzi (Bolivia), Claudia Ulloa Donoso (Peru), Felipe Restrepo Pombo (Colombia), Emiliano Monge (Mexico) , and Carlos Fonseca (Costa Rica) will join translator Sophie Hughes in conversation.

These writers are all part of the new Hay Festival Bogotá 39 selection of great writers under the age of forty from across Latin America. Each is published in a new collection of short stories, translated into English and published by Oneworld this June.

This event is part of Cervantes Institute London‘s Thinking Ibero-América series and is presented in partnership with Hay Festival, Oneworld Publications and English PEN, with the support of the Colombian, Mexican and Peruvian Embassies in the UK.

Liliana Colanzi is a Bolivian writer who has published the short-story collections Vacaciones permanentes (El Cuervo, 2010) and Nuestro mundo muerto (Almadia, 2016). Nuestro mundo muerto has been translated into English and Italian and was shortlisted for the Gabriel García Márquez short story award (2017). She is the publisher and editor at Dum Dum editora. She won the Mexican Aura Estrada literary prize in 2015 and has contributed to publications such as Granta, Letras Libres, Gatopardo, the White Review and El Deber. She lives in Ithaca, New York State, and lectures in Latin American Literature at Cornell University.

Claudia Ulloa Donoso was born in Lima in 1979. She is the author of the short-story collections El pez que aprendió a caminar, Séptima Madrugada and Pajarito, and has won the Peruvian short-story competitions Terminemos el cuento (1996) and El cuento de las 1,000 palabras (1998). In 2016 she was selected as writer in residence at Villa Sarkia, a residence for translators and writers in Finland. Her stories have appeared in various Peruvian, Colombian, Mexican and Spanish magazines and in anthologies such as Antología de la Novísima Narrativa Breve Hispanoamericana (Unión Latina, 2006), Les bonnes nouvelles de l’Amérique latine and Anthologie de la nouvelle latinoaméricaine contemporaine (Gallimard, 2010). She currently teaches languages in northern Norway.

Felipe Restrepo Pombo is a Colombian journalist, writer and editor. He began his career as a reporter for the magazine Cambio under Gabriel García Márquez. In 2016 he published his first novel, Formas de evasión (Seix Barral, 2016), which is set to be translated into English and French. He was editorial coordinator and wrote the prologue for La ira de México (The Sorrows of Mexico, MacLehose Press/Debate, 2016). He has been a guest at Hay festivals in Cartagena, Xalapa, Querétaro and Mexico City. He is currently editor of the Latin American magazine Gatopardo in Mexico City. Since taking up the position in 2014, the magazine has won the National Journalism Prize and has been recognized as the country’s best publication three years in a row.

Carlos Fonseca was born in San Jose, Costa Rica, in 1987 to a Costa Rican father and Puerto Rican mother. When he was seven, his family moved to Puerto Rico, where he went to school. He later studied comparative literature at Stanford University and obtained a doctorate in Latin American literature from Princeton University. In 2015 Anagrama published his first novel, Coronel Lágrimas, later published in English as Colonel Lágrimas by Restless Books, translated by Megan McDowell. In 2017 Anagrama published his second novel, Museo animal, which is forthcoming in English by Farrar, Straus and Giroux. He lives in London and teaches Latin American literature at Cambridge University.

Sophie Hughes has translated novels by several contemporary Latin American and Spanish authors, including Best Translated Book Award 2017-finalist Laia Jufresa (Umami), PEN America Translation Prize-longlisted Rodrigo Hasbun (Affections), and critically acclaimed Ivan Repila (The Boy Who Stole Attila’s Horse). Her translations, reviews and essays have been published in the Guardian, the White Review, the Times Literary Supplement and elsewhere. In 2017 she was a recipient of a PEN/Heim Translation Grant and was named as one of the ‘Arts Foundation 25’, twenty-five artists selected to mark each year the foundation has been supporting creative practice.