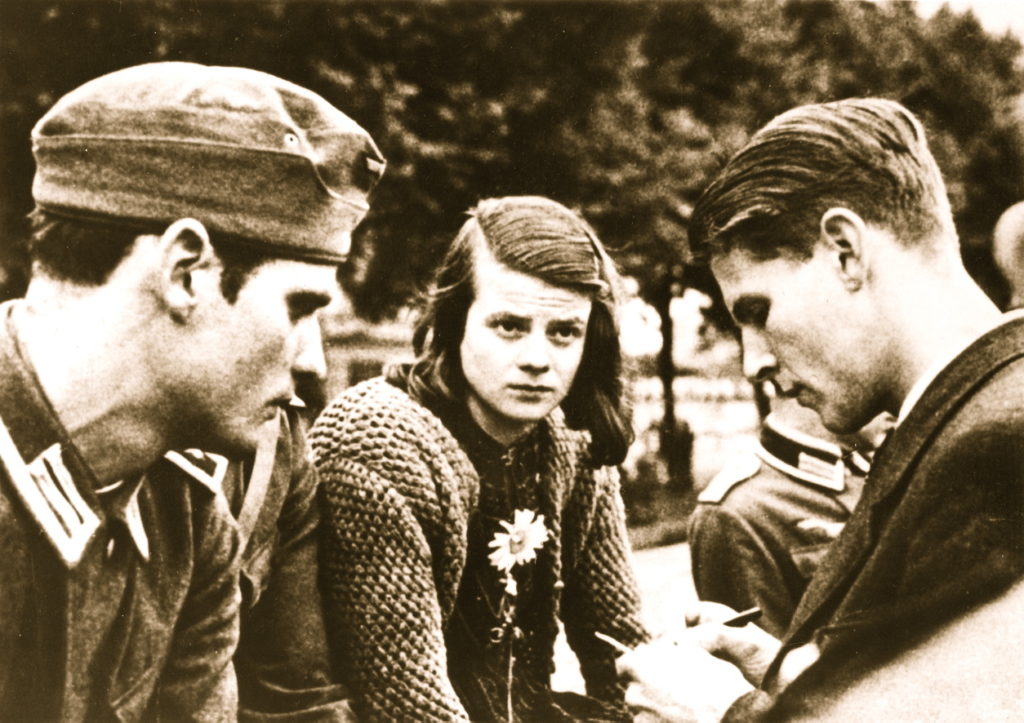 The White Rose was a non-violent resistance group in Nazi Germany led by a group of students. This week is the 75th anniversary of those extraordinary five days from their arrest to their execution. From 18th to the 22nd of February, 1943, Hans and Sophie Scholl stepped into history by enacting what amounted to the first fully fledged protest by German’s against Nazism to occur since Hitler’s consolidation of power in 1933.

Their crime was to print and distribute leaflets in which they denounced the Nazi’s regime of crimes and oppression. In the second leaflet, they denounced the mass murder of Jews. At the time of their arrest they were about to establish contact with other German resistance groups. Five days later they were dead.

The members of the White Rose have since captured the imagination of Germans throughout the country with two films and numerous documentaries made about them, which have won numerous awards. So, this is the story of those five days back in February 1943.

21st Feb 1943. 6.00 pm and it was already growing dark in Berlin. Falk Harnack was supposed to meet Hans Scholl at the Kaiser Wilhelm Church. There were army uniforms everywhere. But Hans Scholl, the student from Munich he was expecting, had not arrived. It was time for Harnack to move on. He was in Berlin to introduce Hans and his friends in Munich to the ‘centre’ of the German resistance.

They seemed almost unaware of the dangers they were exposing themselves to. When Harnack returned to the rearranged meeting point at seven, Scholl was not there. At 7.20. Harnack knew something had gone wrong. He could not have known how wrong.

Three days before the intended meeting, the Scholl’s had brought a suitcase full of leaflets to the university.  It was the fifth such leaflet they had produced. They had dropped copies around the corridors of the University. Sophie had flung the last remaining leaflets into the auditorium.

Unfortunately, the university maintenance man, Jakob Schmid had witnessed this. He had shouted out ‘You’re under arrest.’ After chasing them through the university, Hans and Sophie were led without protest to the Rector’s office.

The Gestapo were summoned. At first, they couldn’t believe this calm and quiet brother and sister could be the source of the mysterious leaflets that had been appearing.

But then the situation changed. All the leaflets had been collected by the gestapo and brought to the Rector’s office. They began putting them in the empty suitcase that Sophie and Han’s had been caught with and found they fitted perfectly. It was the suitcase they had used to bring the leaflets to the university.

Robert Mohr, leading the investigation ordered for them to be taken to gestapo head office for interrogation. At this point, Han’s took a leaflet from his pocket which he tried to destroy by tearing it apart and eating it. Unfortunately, most of the leaflet was salvaged.

The interrogation of the brother and sister went on for seventeen hours – in separate chambers. The Gestapo learned nothing. The two students denied any involvement.

But then the house of cards collapsed. The gestapo had found a letter in Han’s flat written by Christoph Probst which matched the handwriting on the leaflet he had tried to destroy. Christoph Probst was arrested by the gestapo on Friday evening on his way to see his wife who was still in hospital after the birth of their new baby.

The Scholl’s and Probst were scheduled to stand trial before the Volksgerichtshof – the Nazi ‘People’s Court’. It was infamous for its show trials which often ended in execution. Himmler himself had decided on the outcome.

Roland Freisler, head judge of the court was one of the most repellent figures in the constellations of power. The name Freisler in a courtroom meant abuse, degradation and death. The court case lasted for three hours and as it came to its inevitable conclusion, Robert Mohr suggested the prisoners write letters to their parents. The letters were short. They said they could not have acted otherwise and asked for forgiveness for the pain they had caused. The letters were never sent.

At various points in the trial, Freisler was interrupted by the voice of Sophie. ‘What we said and wrote are what many people are thinking. They just don’t dare say it out loud’ she said at one point. The courage of these three young students was extraordinary.

At five o’clock in the afternoon, three hours after the trial had ended the three inmates were executed by guillotine. As he was led across the yard, Han’s shouted out ‘Long Live Freedom’ so all the inmates behind bars would hear.

On a piece of paper left in her cell Sophie Scholl had written one word – FREEDOM.

A visitor to post-war Germany would have experienced a country with a shocked and sullen ambivalence about its recent past. This was probably not surprising considering the rest of the world was also struggling to come to terms with the deeds of the war.

The subject of the concentration camps was taboo and not to be brought up in company. This remained the case until the late 70’s when an American TV series on the Holocaust became a surprise hit. Special phone lines were set up to deal with the thousands of calls they were receiving from viewers expressing anguish, grief shock, horror and disbelieve. Soon afterwards two well known film-makers the White Rose to the screen and they have since captured the imagination of Germans throughout the country.

There are memorials throughout the country and street signs and schools have been renamed after them. One of their leaflets had said ‘Cast off the cloak of indifference you have wrapped around you. Make the decision before it’s too late.’

Each person is responsible for what he does and what he allows to happen. In the darkest moment of the 20th Century the White Rose demonstrated this truth.